Dr. Jennifer Reierson: A mother of a boy (7) and girl (4), earned her PhD in Communication from North Dakota State University in 2009. Her areas of research and expertise include public relations, risk and crisis communication and at-risk or under-served populations. She has conducted research with immigrants and refugees and taught Intercultural Communication. As an Assistant professor at both The College of St. Scholastica and the University of Minnesota Duluth, she was involved in initiatives focused on diversity. Her publications span international, national and regional journals. She has presented her research at numerous national and international conferences, as well as local non-profit events. Also an undergraduate at the University of Minnesota Duluth, she first learned of Jebeh’s story when the threat of deportation led to student support and awareness of Jebeh’s unique situation. She now works as an Assistant professor at the University of Minnesota Duluth and Public Relations Strategist at Flint Group.

Gratitude in turmoil: Finding peace in a time of uproar 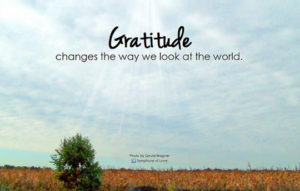 Again, it’s been a while. The pace of life and daily demands continue to get in the way of writing. But, it doesn’t get in the way of reflecting. I reflect daily, when something doesn’t sit right. When a comment, smile, nod doesn’t feel right or when I notice something beautiful. Practicing reflection takes conscious effort and I don’t always get it right, but I’m trying.

It’s not new – this social uproar. It may feel HUGE right now and it is. But, social uproar can be a catalyst for change. For bringing pivotal issues to the forefront. It forces conversations to be had out loud, in vibrant tones. Conversations that may otherwise have been had behind closed doors or in hushed voices.

I’ve sat with all of this for a month now. Watched highly intelligent and passionate people articulate so eloquently their points of view. Watched others rage in fear, pain, and dissolution. I felt it all. Every bit. Every comment. Every heartfelt plea.

I felt it and this is what I want to say. Don’t give up. Reflect. Daily. On the joys in your life, the friendships you’ve built, the passionate, intelligent people around you. See the good – on both sides (of the aisle, issue). Speak up, respectfully. Do good, daily. Our ability to break down the BIG things into small daily reflections and actions will make change.

Regardless of your political or religious affiliation, this season brings hope and light. It’s a time of reconnecting with family and friends. What we also need to remember is it’s a time of respect for and reflection about our true place in all of it. A time to be reminded of our humanness and the humanness of those around us.

Perspectives and passions may differ, but our job is not to change others. It’s to LISTEN to others. To SEE how they see. Only by seeing what others see, feeling what others feel can we truly understand them. In doing so, we build compassion and also insight that can help us share ourselves and our own views more authentically.

My hope is that we can all find a little peace in this tumultuous political and social environment. That we can reflect daily and be grateful for the opportunities we have to connect with others. For me, this past month has required mindful reflection to find gratitude in turmoil and peace in a time of uproar.

Taking a Stand: Athletes, Voices, and the National Anthem

I’ve given it a couple weeks to sit. Sometimes I like to just let ideas stew – mix, absorb, penetrate, and reform again as something more holistic and refined. I’ve wanted to comment, to jump in, to make a point, but I don’t think I was ready.

A few week ago, Colin Kaepernick started gaining attention for his protest demonstration during the national anthem at an NFL game. The story has continued to progress with more athletes joining in the protest and in turn more responses and opinions shared on national and international media. Interestingly, Megan Rapione’s attempt to kneel in solidarity with Kaepernick was thwarted by the Washington Spirit ownership. Another demonstration of power structures determining which voices can be heard?

I don’t want to dig into the politics of it all, but as a sports fan, I want to point out the immense power that professional and collegiate athletes have. They have the power to change the conversation, to call attention to issues that we should all be concerned with, to share their voice and the voices of so many like them.

Whether we agree with their methods or not, we must at least recognize that athletes, like all of us, are whole people. They can’t and shouldn’t shed parts of themselves when they step into their role as athlete. While the professional atheletics system operates in a way that positions athletes as commodities, as “stock” to be traded, developed, bought and sold, they are actually living, breathing humans. They are people with real lives and real experiences both on and off the playing field.

As we’ve pointed out many times in this blog, you can’t understand someone else’s point of view, perspective or version of reality until or unless you have walked in their shoes. Until you have experienced life as they experience it – day in and day out. That goes for everyone, including our military – many of whom have taken offense to the anthem protest, and our professional athletes – many of whom have been on the front lines of race relations and issues in their own communities.

My thoughts might still be disconnected and confused regarding this issue. But, in the end I believe in freedom of speech – the right to a voice and the power that comes with a collective voice. I believe in using the platforms available to you to project your voice. To fight for the things you believe in. We all should. If we don’t, we are seriously undermining the values upon which our United States government was formed.

So, If I was to encourage anything in those who are reading, it would be to encourage others. Support athletes like Kaerpernick, Rapinoe, and J.T. Brown in their quest to open dialogue and have honest and true responses to controversial issues. They are not, as athletes, commodities with a single purpose. They are people, with experiences, perspectives, and knowledge that can reach so many and hopefully influence others along the way.

As a Bulldog alum and former Bulldog athlete, I want to end with a shout out to J.T. Brown. He used his voice to bring perspective to a controversial stance by the coach of the USA Hockey at the World Cup, John Tortorella. Brown’s approach and ability to articulate the idea of perspective was powerful and spot on and quite frankly probably something few in that particular audience (hockey) had considered before. His willingness to speak-up, to use the platform he has as a professional athlete gives me so much hope. Hope that little by little people will listen, open their minds and hearts, and slowly but surely change.

Stuck landing: Lessons from the Olympics

For two weeks every two years the world comes together to celebrate diversity, hard work, sacrifice and perseverance. We rally behind athletes whose stories bring tears to our eyes, who have overcome odds, injuries, personal struggles, and often political and social conflicts within their home countries. We see the common struggles. We see the desire to work for something and achieve something greater than ourselves. We see the best in people.

This lens into humanity has profound power. Power to transform our own lenses even if its only for a little while. I love the Olympics for this reason. We see what it means to be human. We feel the anxiety, disappointment and elation along with the athletes. We cheer and we mourn along with others who may or may not “be like us” on the surface.

Athletes on the Olympic stage have tremendous power to remind all of us how connected we are. How the human experience is a common experience. Whether they choose to speak out or actively engage in conversations related to diversity (religion, skin color, sexual orientation), each and every athlete influences those who watch.

The Olympics are also ripe for commentary, negative attention, poignant remarks and critiques related to coverage and portrayal of athletes, diversity issues, and gender issues. I applaud those who are willing to push, explore and bring attention to these issues.

But for now, I want to focus on the positive…

As my white skinned five year old swings from our play set, drops to a stuck landing and announces, “Simone Biles sticks the landing!” I have to smile. For today, Simone is her hero. For today, we are united in the struggles and glory of our country’s and the world’s athletes. For today and the two weeks every two years that bring nations together, we celebrate diversity. We honor common struggles that make us human. We listen and we feel. We are united. 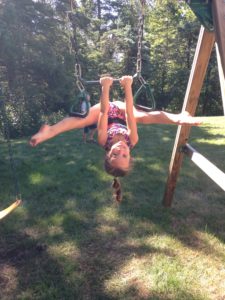