Taking a Stand: Athletes, Voices, and the National Anthem

I’ve given it a couple weeks to sit. Sometimes I like to just let ideas stew – mix, absorb, penetrate, and reform again as something more holistic and refined. I’ve wanted to comment, to jump in, to make a point, but I don’t think I was ready.

A few week ago, Colin Kaepernick started gaining attention for his protest demonstration during the national anthem at an NFL game. The story has continued to progress with more athletes joining in the protest and in turn more responses and opinions shared on national and international media. Interestingly, Megan Rapione’s attempt to kneel in solidarity with Kaepernick was thwarted by the Washington Spirit ownership. Another demonstration of power structures determining which voices can be heard?

I don’t want to dig into the politics of it all, but as a sports fan, I want to point out the immense power that professional and collegiate athletes have. They have the power to change the conversation, to call attention to issues that we should all be concerned with, to share their voice and the voices of so many like them.

Whether we agree with their methods or not, we must at least recognize that athletes, like all of us, are whole people. They can’t and shouldn’t shed parts of themselves when they step into their role as athlete. While the professional atheletics system operates in a way that positions athletes as commodities, as “stock” to be traded, developed, bought and sold, they are actually living, breathing humans. They are people with real lives and real experiences both on and off the playing field.

As we’ve pointed out many times in this blog, you can’t understand someone else’s point of view, perspective or version of reality until or unless you have walked in their shoes. Until you have experienced life as they experience it – day in and day out. That goes for everyone, including our military – many of whom have taken offense to the anthem protest, and our professional athletes – many of whom have been on the front lines of race relations and issues in their own communities.

My thoughts might still be disconnected and confused regarding this issue. But, in the end I believe in freedom of speech – the right to a voice and the power that comes with a collective voice. I believe in using the platforms available to you to project your voice. To fight for the things you believe in. We all should. If we don’t, we are seriously undermining the values upon which our United States government was formed.

So, If I was to encourage anything in those who are reading, it would be to encourage others. Support athletes like Kaerpernick, Rapinoe, and J.T. Brown in their quest to open dialogue and have honest and true responses to controversial issues. They are not, as athletes, commodities with a single purpose. They are people, with experiences, perspectives, and knowledge that can reach so many and hopefully influence others along the way.

As a Bulldog alum and former Bulldog athlete, I want to end with a shout out to J.T. Brown. He used his voice to bring perspective to a controversial stance by the coach of the USA Hockey at the World Cup, John Tortorella. Brown’s approach and ability to articulate the idea of perspective was powerful and spot on and quite frankly probably something few in that particular audience (hockey) had considered before. His willingness to speak-up, to use the platform he has as a professional athlete gives me so much hope. Hope that little by little people will listen, open their minds and hearts, and slowly but surely change.

Reflections of love, loss, and legacy 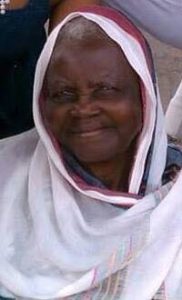 Civil strife and unrest separated me from my grandparents. My parents’ courageous decision to leave their homeland of Liberia must have been a hard one to make. Most kids that I grew up with had their grandparents close by. The few times I was around my grandparents are some of my most cherished memories.

My paternal grandmother, Ma Haja, loved our frequent visits to the Dollar Store. She was fascinated with how cheap everything was. I can’t tell you how many times she asked my dad in delight while we shopped, “How much is this again?” It was like she won the lottery.

As an adult now, I realize that my grandparents seeking refuge at our home was  a temporary situation. Trips to the Dollar Store would only last a little while. Reality would set in and her time with us was inevitably cut short. Grandma would have to go back to the chaos of war.

Six months ago, my sweet grandmother, Ma Haja, passed away. I will remember her baritone voice and laugh. She nicknamed me ‘big sister’ because her older sister was my namesake. Her passing has allowed me time to reflect on the ways she impacted my life and how she was with me in spirit during major milestones.

She would send my favorite peanut butter and sugary treat called Kayan, when I was studying in my college dorms. She was unable to attend our wedding due to more political strife, but she sent a Lappa (long piece of fabric, traditionally worn as a skirt) with my aunty so we could have a piece of her there to celebrate. I was blessed that my boys were able to talk with their great grandmother in Liberia from time to time. 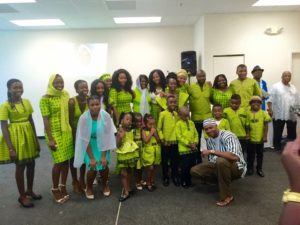 She would have been 90 years old this month. Two weeks ago, our family and friends in the U.S gathered to celebrate her life. Most of her grand and great-grandchildren wore her favorite color green, and her children wore all white.

It was a beautiful, traditional Liberian event. In honor of her religion, we had local Imams recite the Quran and all the women had special Hijabs during the service. We danced, reflected with old photographs, shared stories, and reconnected with each other.

My grandmother was a strong and determined woman. Many people in our home country loved her. She built several mosques throughout Liberia. She built a bus shelter in her hometown so people wouldn’t have to wait in the rain for transportation. She was married to my Episcopalian grandfather for 61 years. Although they were married and practicing two different faiths, they respected one another. She didn’t have a formal education, but she expected all of her children and grandchildren to get an education.

She was a respected mother. She had 13 children of her own and raised more children without hesitation, taking in friends and family who needed support. Every day dozens of people filled her front porch and yard ready to listen to her speak her truth. They would follow her everywhere she went with praise. She was grounded in her faith. She was unapologetically headstrong.

I didn’t have my grandmother physically around me all the time. But, I can attest that our bond was very strong. Our few shared memories and her legacy of strength, compassion and wisdom will always beat strong in my heart.