A beautiful and well-spent Thanksgiving reminded me of the challenges of explaining privilege to my kids, of expressing gratitude, genuinely and with conviction. Sometimes I feel like a broken record reminding my kids to be thankful, to recognize their blessings, to realize their privileges. Truth is, I need just as many reminders during the daily grind as they do.

So, today, now, I’m pausing. I’m writing a few of them here – the privileges I wish I could see and appreciate in the moment. I’m grateful for:

As you move through your daily grind may you take a moment to pause, to see the privilege in daily moments, to be thankful for the things that may irritate you the most. Likely, those things are true reflections of our privilege.

Mothers dread dragging their kids to the grocery store. This particular trip was an ‘oops’ moment on my part. I forgot to get the main dish to cook up for supper that night. I rushed from work, picked up my kids from childcare and ran to our nearby grocery store. My negotiation with my darling boys was my regular directive. “Stay quiet, hands-off, and you get a doughnut.”

The boys were smiling. This is a major treat in the Edmunds household. Yes, I bribe my kids when I’m in a hurry (no judging).  In my determined state, I bobbed and weaved through the aisles with two slow paced kids in tow. I grabbed the last rotisserie chicken at the deli and was off to the bakery aisle. Both boys were keeping up with their mama ready to pick their favorite and most coveted treat.

Then, it happened…. an elderly white woman came up to me with a not so pleasant smile on her face and asks me the most dreaded question of all… “Can we still call you colored?”  I could feel time standing still and my beautifully blended sons stared up at me with the most confused looks on their faces.

They’ve never heard of the term ‘colored’ before except for contexts such as describing the color of their favorite Teenage Mutant Ninja Turtle. The moment presented itself. I knew this woman had something to learn. So, I put on my  first grade teacher smile and gave her the rebuttal of her lifetime.

I said with the upmost pride, “No, You may call me Mrs. Edmunds and my sons are named Maxwell and Mateo.” I also used my pseudo-Liberian accent (which my husband gets when I’m frustrated with him) and concluded, “ Where I come from, we define ourselves by our names and not by race or derogatory comments.” Her face was shocked. While I walked away prideful with my sons, doughnuts, and cold chicken I felt great. How would you react if a total stranger called you or your child colored in a public setting? #imnotcolored

Sucking the poison out of the air

When I was in grad school we spent a lot of time on critical theory. We learned how systems are built on power and that power influences how we see the world, what stories are told, who has access to money, opportunity, and land and subsequently wealth and privilege.

Honestly, it was overwhelming and depressing. For the first time I really saw my own privilege and blindness to systemic racism. I coped by passionately telling anyone who would listen. By calling my friends and family out for being benefactors of the “power system.” In my mind I was helping educate, in my husband’s I was offending and damaging relationships. I remember a heated argument in which he asked me to “cool it.”

If only I had the words of Glennon Melton, maybe people would have truly listened instead of being defensive and offended. She says everything I had been trying to say with such compassion, understanding, and conviction for the truth and the story of our culture. Please, read and share so we can all join the effort to “suck the poison out of the air.”

Momastery: Why I’m Prejudice and So Are You

The Problem with Little Black Sambo in the Window 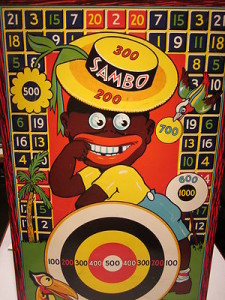 I’m not a confrontational person. But on one particular day I felt compelled not only as a black woman but as a person with common sense to speak up and say something.

My family and I were downtown on a Saturday afternoon and parked in front of an Antique store. Something caught my eye.  I saw a huge tin poster of a black boy with enlarged red lips and big eyes with the title “The One and Only Black Sambo!” I was shocked and appalled. I wanted to protect my children and others from seeing this horrible form of racist memorabilia.

Why was I so easily upset by this piece of merchandise? Because we are exposed to dehumanizing images from the past like Little Black Sambo and other racist depictions daily, and most of us don’t even recognize it. Take the grocery store for example. Look closely next time you’re in need of pancakes, syrup, rice, or farina. What images do you see? I bet you can visualize at least one example now that I’ve pointed it out. The harsh reality is that racist memorabilia is a multi-billion dollar industry.

So, when I saw “The One and Only Black Sambo” I was compelled to say something. I walked into the store and calmly asked for the manager. Growing up black in America, I was taught to approach certain situations involving ignorance as calmly as possible. I spoke calmly to the elderly white female employee. I voiced my concerns about the merchandise. I shared that this particular piece might be offensive to some.  She became defensive and refused to move the horrible black caricature. The moment I tried to reason with her, she became angry. I suggested she turn the sign over to the inside of the store, that way foot traffic outside the store would not be offended.

I walked over and showed her where the sign was. She rolled her eyes and said she would move it. I felt in my gut that I did the right thing and I hoped she would listen. A few days later,  I went back to that Antique Store and saw “The One and Only Little Black Sambo”  still  facing the streetlight staring back at me.

This might seem like such a small thing. But when we look at it in the context of an entire industry or consumer culture we see that brands still leverage similar images to sell products. So I ask, when will we stop buying and start changing the momentum of a multi-billion dollar industry that dehumanizes people of color?