What is color brave?

I found this and said, “yes – that’s what Jebs and I are hoping to do.” Just talk about it, don’t hide from it. Mellody is an inspiration. Listen with an open heart!

It’s the daily things, the “small” conversations, the smile, glance or acknowledgment. The ability to say, “hey, I don’t think that’s right.” Or, “hey, what if I questioned that assumption?” Or, “hey, let’s learn a better way.”

I want to share a quick example. Jebeh and her kids joined my kids and I at the “club” pool this summer. When she walked in and tried to pay her guest fee, a server (meaning well, I’m sure) said, “that’s okay, nannies don’t have to pay.”

Jebeh came right over and shared with me – she was hurt, offended and frustrated. Rightfully so. We talked and let it mellow. Later that week another friend called to ask me about the “incident” because Jebeh had refused her invite to join them at the pool. This friend suggested we talk to the manager just to let him know.

This is what fuels my hope – the manager was amazingly receptive, apologetic and asked point blank how he could make it better. He had his own ideas about staff training, etc, but was thrilled when we suggested an apology sent directly to Jebeh.

And he did. He apologized. He told her how he was addressing staff training and asked her and her family to be his guests and enjoy a nice dinner at the pool. Simple. Human. Connection.

Feeling validated and heard. Feeling that people do care. Seeing that they want to be better and do better. Feeling that, seeing that, nurtures hope.

Dancing in the Nude (Tights) 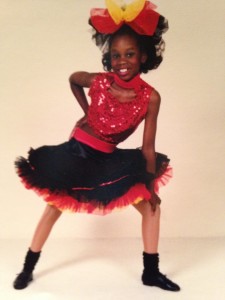 I remember dancing in my mother’s kitchen as a child, scuffing up her laminate floors with my Sunday school shoes. I thought I was tap dancing. My mother knew I had energy – she saw how I wore my leg warmers, purple leotard and practiced the latest dance moves from Soul Train. Dancing was in my blood.

So, my mother signed my sisters and I up for dance. At the time we were the only black family enrolled. When it came to costumes, nude tights (nude = white person nude) were required. My mother asked the director if that was our only option. The director explained the goal was to keep everything uniform – especially for competitions. Uniform how? From the waist down?

In High School, my mother brought dark tights for me and I wore them out on stage. When I got off stage my director had “nude” tights waiting for me. I complied and changed. I looked up to all of my dance teachers and peers. They nurtured my love of dance and it played an important role into college – I danced for my college team.

Those dreaded nude tights, however, were a staple in my dance costumes for nearly 13 years. I still see this phenomenon in our country – dressing little black girls in “nude” tights for dance. Why are little black girls accepted in the dance world from the waist up? Why should we hide our dark legs? It may seem like a small thing, but the message is powerful.

My mom laughs and said “It didn’t kill you.” No it didn’t mom, but it sure made me look back at my hundreds of dance costumes and laugh – because nude tights looked so “natural” on my dark skinned legs leaping across the stage ☺. #brownballerinas

What I don’t worry about…

What I do worry about…

What gives me hope…

I promised myself I’d do my best to make sure my kids understand the world – all of it. The good, bad, ugly and how they can affect change through their privilege. I’ve noticed that this takes a LOT of effort. My children are not exposed to much diversity – in lifestyle, economic status, family type, etc. I will own that failing.

But, I do my best to acknowledge and speak of our privileges as such. To validate differences when we see them. To explain how our actions and choices can affect others. I hope, as we all likely do, that my kids will grow to be compassionate, giving, understanding and appreciative of what they have. And, that they will choose to use their gifts to honor others.

7 Things Never to Say to your Child’s African Teacher

Teacher stories. Most of mine are inspiring, but some are cringe worthy. If your child has a teacher of color, especially a person of African decent, please think before you speak. Avoid these harmful, stereotypical questions or statements. These are real – from the mouths of parents…

1) At Open House: Don’t ask, “What are your qualifications?” I have received this question more than once and it’s very hurtful. If you’d like to know more about your child’s teacher, contact your district’s human resources department.

2) Black teachers do exist!  I overheard two mothers chatting at soccer. They didn’t know I was there. One whispered, “OMG, our daughter has ‘the black teacher’.” If you are nervous about this, set up a time to chat before school starts.

3) “How do you wash your hair?” Humans have hair. We use the same products. Enough said.

4) I dated a “black girl/black guy” once. Please don’t confess your relationships or relations with a specific cultural group to your child’s teacher.

5) Do you speak African? African is not a language. The continent of Africa has over 5,000 dialects spoken daily and African is not one of them. If your teacher has a native dialect other than English they will let you know.

6) You must be happy to be free in America. This statement is especially harmful. Many African immigrants fled their homelands due to conflict and are still traumatized by the circumstances. Think of your ancestors and how they arrived here. Some of us still have family back home and feel the loss of our loved ones greatly.

7) What should we call you?  It’s easy. (Insert Prefix here: Mr., Ms., Mrs.______). We deserve to be acknowledged and recognized with respect alongside our white colleagues.

Have your reactions to your child’s African teacher been positive?